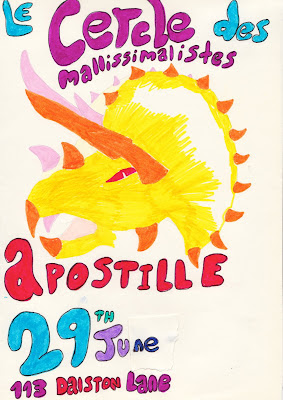 The next Apostille show is on Friday 29th at 113. The show will be with Le Cercle Des Mallissimalistes who judging from this video will be performing a sweaty guitar ritual en masse in the London heat.
Le cercle des Mallissimalistes from Hartzine on Vimeo.
This band features Jan who's always very accommodating in Bordeaux and also plays in a great avant pop group called Chocolat billy. After that the next scheduled show is on the 24th of July with Mazes at the Seabright Arms.. more on that later.
Posted by apostille at 12:21